I arrived back in Ghana on June 30th.  I came this year with a number of goals, including presenting at the 2nd Ghana Studies Association Conference and attending meetings to establish further collaborations as part of my digital humanities project.  However, I also wanted to begin work on my next major research project:  a history of urbanism and urban planning in 20th century Accra.  That project begins in the early decades of the 20th century, when the British colonial government sought to use disasters like the bubonic plague and an earthquake to reshape the city.  That work necessarily requires archival research and interviews, some of which I have already begun to pursue.  But the project also explores more recent forms of urbanism, often identified with petrocapitalism and Afropolitanism.  This is the same form of urbanism that gets Accra on New York Times lists of the hottest places to travel, featured in glossy fashion and art magazines, and lauded by Forbes and others as a site of an “African Renaissance“.  This is the Accra of cupcake boutiques and cafes, steakhouses and Japanese bistros, fashion designers and shopping malls, art galleries and luxury hotels.  It is what Ato Quayson called “boutique cosmopolitanism” in his keynote lecture at last week’s Ghana Studies Conference.  The notion of boutique cosmopolitanism implies not only a rarified air but also an atomized experience–small pockets of cosmopolitan culture tucked away in corners around the city, connected through the technology of social media, advertised on Instagram, shared through reviews on new urbanist websites. 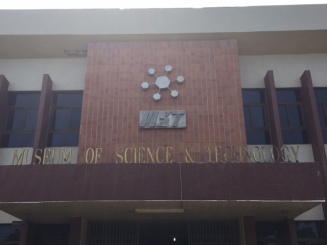 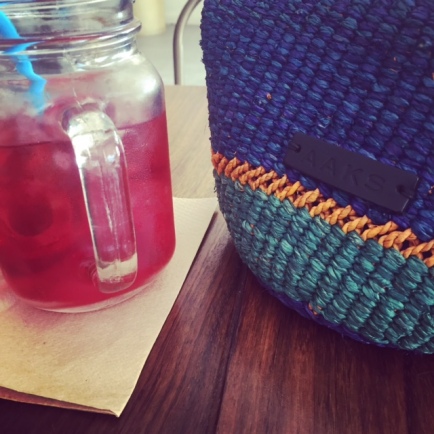 Part of my goal this trip, then, was to begin a long-term ethnographic exploration of this most recent manifestation of urbanism, encapsulated perhaps in the sign you pass traveling past Independence Arch between downtown Accra’s High Street banks and the commercial quarter of Osu: “A New Accra for a Better Ghana.”  In order to do so, I decided to experiment with driving myself.  There were at least two benefits to this: 1) I could better fit in with the clientele in the establishments I sought to visit, whose relative wealth is displayed in part through the luxury of their vehicles, and 2) I could more easily move between the relatively dispersed zones of cosmopolitan culture, found tucked away in neighborhoods like Labone, Cantonments, Kanda, Ridge, East Legon, Airport Residential, and Spintex.  Taxis and trotros rarely travel to these areas.  The residents of these areas often drive themselves, after all.  And I wanted the freedom to move and explore without having to convince a taxi driver to go with me on my explorations or engage in constant negotiations over fares.  When I arrived at the local branch of Europacar on Spintex Road, I quickly realized that there was another benefit.  My “economy car” was quite nice.  Air conditioned luxury for me this week!  I felt like I fit the part.  So I cast aside my normal lorry park attire in favor of a more fashionable look (as much as that is possible for me) and set out to explore the city.

I pulled out onto Spintex Road, an area with which I was completely unfamiliar, headed toward the Accra Goods Market in East Airport, another area with which I was completely unfamiliar, armed with the GPS on my smartphone.  Driving myself was enlightening.  I learned how fluid traffic was on Accra’s streets.  Drivers edged themselves into traffic, daredevils in what seemed like a constant game of chicken.  And yet somehow merging seemed just as difficult as it did in Michigan, as everyone sought to protect their place in the line of traffic.  Few people used their blinkers.  My very first journey involved crossing the busy Spintex Road and then traveling through a small one-lane tunnel and parking in the middle of a field across from a public park.  Driving that first day was disorienting as I sought to get a sense of the road and its hazards, following my GPS closely in order to avoid getting lost.  Nevertheless, I arrived back at the hotel feeling optimistic about the week ahead.

In all of my previous trips to Ghana, I relied on trotros and taxis to move around the city.  Studying public transportation required me to use public transportation, I reasoned.  Accra residents have often commented on my familiarity with large parts of the city, and I was confident about my knowledge of Ghana’s major roads.  So as I set out for the University of Ghana at Legon, I left my GPS off.  I had traveled this route hundreds of times.  At one point I could identify and name every trotro stop between Accra Tema Station and Madina Old Road Market.  And yet, I missed a turn and soon found myself disoriented.  While I eventually reasoned my way back on track, this state of disorientation would last for much of the rest of the week. 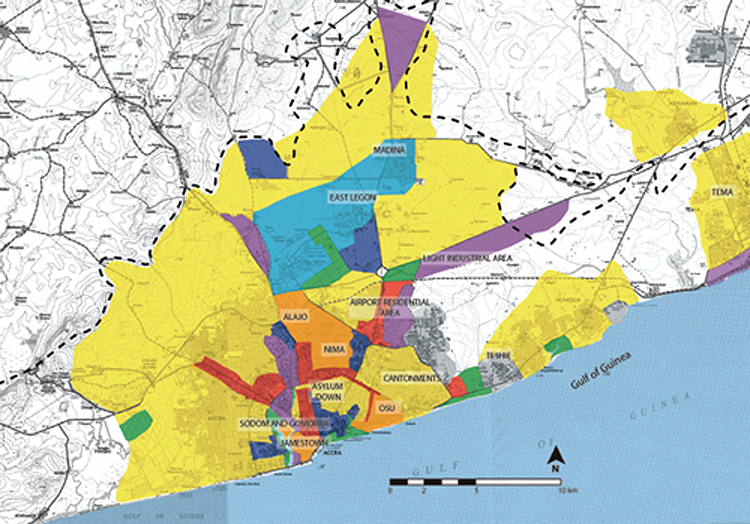 I initially assumed that my disorientation was the result of being “lost.”  Indeed, I quickly learned that “riding on roads” was not the same thing as “driving on roads.”  Particularly in areas where I never had to provide detailed directions or guidance for drivers, like the various shortcuts between Oxford Street and Liberation Road, I was unable to translate my mobile passivity into navigational competence.  Other areas like East Legon had changed so much that I was unable to find my way.  Still other areas were curiously blank on my experiential map of the city.  Despite having lived in both Cantonments and Osu and having worked extensively in La, I realized that I had never spent time in Labone.  Even with a GPS, I regularly missed turns, resulting in constant rerouting and extensive detours.

However, as I pulled onto Liberation Road on day three as a “myself” driver–a stretch of road that I had not only ridden on but also walked down for nearly 15 years–I realized that my disorientation was more than navigational.  Driving myself disconnected me from the life of the street and the landscape of the road, as I navigated traffic focused only on those around me and the lane in front of me.  I didn’t know where I was because I was not experiencing the same space in the same way.   My mobile history was intimately interconnected with this sensory landscape. 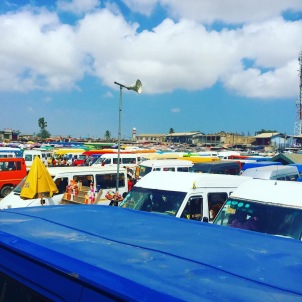 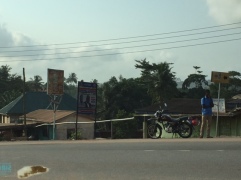 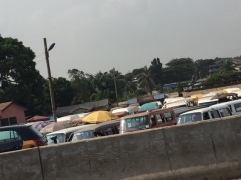 Over the course of the week, I met people who, like me, experienced the road as both passengers and drivers.  Young men like Sylvester and Kwesi of Open Street Map Ghana, a coalition of tech-savvy citizens who are attempting to create accurate, comprehensive maps of the country’s major cities, took trotros to their meeting with me at The Cupcake Boutique in Labone. As young family men working for municipal assemblies on opposite sides of the city, Sylvester and Kwesi both owned cars, but they could not afford to use them regularly on long commutes that would require significant amounts of petrol each week.  Instead, Kwesi said that he took trotros, leaving the car for his wife to run errands and take care of their children–an arrangement that is not dissimilar to my own single-car household in Detroit.

I also met people who never rode in trotros.  At the same Cupcake Boutique, I met people who were newly relocated to Ghana after many years in the US.  These are the people I saw repeatedly at other shops, restaurants, and cafes and with whom I interacted on Facebook, Instagram, and Twitter.  As we conversed, we became fast friends, part of a small community of cosmopolitan interaction, connected through our shared consumption of “global” culture.  In doing so, however, we seemed to insulate ourselves from the world outside of the air conditioned buildings and cars.  The very physical limitations of driving itself seemed to inhibit my ability to reestablish connection.  When I tried to take in my surroundings while driving, I missed signs and almost ran stoplights, resulting in conversations (but no real consequences) with the police.

In other words, blurring the boundaries between the “two Accras” requires a social mobility that at least some are insulating themselves against, even as they move freely through urban space.  Autonomy is a form of social, psychological, economic, and physical alienation.  What, then, will the “new Accra” look like?  Will everyone be able to see it in the same way?

2 thoughts on “Driving Myself:  Experiencing Space, Autonomy, and Mobility in the “New Accra””